One night this summer while Brandon and I were at the beach with his side of the family, we sneaked out the patio doors of our bedroom and sat in the tall wooden beach chairs to watch the ocean and the sky as yet another meteor shower began.  The ocean pushed rhythmically against the shoreline, looming mysterious below. From where we sat and with the limited amount of light, we couldn’t see the beach clearly, but we could hear it, a constant swelling and crashing reminder of its presence. 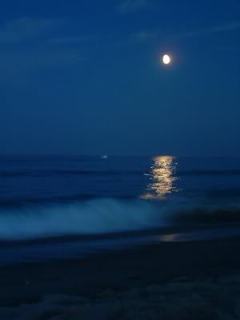 This body of water that already seems endless and huge in daylight only grows in its enormity, mystery, and danger after the sun has set.  In the darkness of night, what rages on the shore is unknown. The waves could be monstrous or simply lapping the sand, it’s hard to tell. The sand itself seems to move and sink and rise overnight as the ocean works its shifting.  In the morning, we would walk along the shoreline and find the castles and moats that were created yesterday swept away, no evidence left except maybe a small whirlpool, some discarded shells.  The ocean daily restores the beach, undoing what has been done.
I didn’t care to walk along the shoreline in the night; I wanted to sit near the roar of the ocean, the warm salt breeze gusting, and revel in this power and this glory, both above us and below, to hear the work of redemption on the shore.

I sat with Brandon on the beach chairs high above all of those unknowns holding his hand, staring out over the dunes and up into the night sky, grateful for the roaring gift of mercy, peace alighting like the sea salt breeze on our skin.
“Suddenly a great company of the heavenly host appeared with the angel, praising God and saying, ‘Glory to God in the highest heaven, and on earth peace to those on whom his favor rests.'” – Luke 2:13-14

Sarah M. Wells is the author of Between the Heron and the Moss (2020), The Family Bible Devotional: Stories from the Bible to Help Kids and Parents Engage and Love Scripture (2018), Pruning Burning Bushes (2012), and a chapbook of poems, Acquiesce, winner of the 2008 Starting Gate Award through Finishing Line Press (2009). My memoir, American Honey: A Field Guide to Resisting Temptation, and the second volume of devotionals, The Family Bible Devotional: Stories from the Gospels to Help Kids and Parents Love God and Love Others, will be released in 2022. Sarah's work has been honored with four Pushcart Prize nominations, and her essays have appeared in the notable essays list in the Best American Essays 2012, 2013, 2014, 2015, 2017, and 2018. Sarah is the recipient of a 2018 Individual Excellence Award from the Ohio Arts Council. She resides in Ashland, Ohio with her husband and three children. View more posts