Eight years ago today, we had a vision for how the wedding would go.  All of our plans came to fruition– the bouquets were held, our friends and family played music, our pastor spoke, we exchanged rings and shared communion and lit a candle, there was cake, there was dancing, the bar was open (and restocked, several times), the food was eaten– it was by all accounts a beautiful and celebratory wedding. Our hopes for the future were there, too, but I don’t think either of us ever dreamed about where the next eight years would take us.

In the last eight years, we’ve painted every wall in three different houses together.  We have taken new jobs and quit old jobs, left churches and joined churches.  We have made new friends and sustained old friendships.  We’ve bought cars, sold cars, leased cars (oops), traded in cars, and fixed cars.  We’ve learned the hard way that you need to replace the air filter on your furnace if you don’t want your A/C unit to freeze up.  We have brought three children into the world and miscarried four.  We’ve attended dozens of concerts and eaten at Japanese steakhouses for many a special occasion.  We’ve slammed doors and cried and held back and let go.  We’ve forgiven each other and loved each other more deeply.  We continue to become better versions of ourselves in Christ.

I can hardly remember the girl in the wedding dress eight years ago, jumping around in a circle waiting to go down the aisle.  She’s a happy, two dimensional shadow of who I am now.  I am so blessed to be yoked with my husband who has helped shape me, who supports me, and who partners with me in the great task of raising our family, running our home, and growing closer to God.  I am so proud of you, Brandon, and always grateful.  Happy anniversary to us! 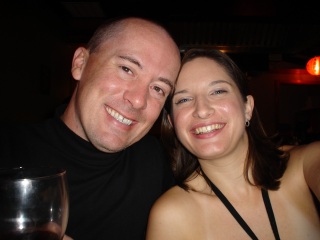