Would ya look at that?  It’s been a month.  The MFA summer residency was here and then gone, those two weeks that last two months and then feel like just days once it’s over.  I think it might have been the smoothest residency we’ve run since 2007, which is saying something, since I was also in class this time.  It was an extremely productive and inspiring two weeks, to say the least.  And then, I hopped on a jet plane to North Carolina to meet my lovely family for a week of vacation.

Oh, sweet, sweet vacation.  How I miss you.

While I was on vacation, I devoured The Diving Bell and the Butterfly by Jean-Dominique Bauby and The Boys of My Youth by Jo Ann Beard… and also crab cake sandwiches. I’ve wanted to read Beard’s collection of essays since I read “The Fourth State of Matter” in Tell It Slant last semester, and I was not disappointed. The trouble is that now I’m feeling that intimidation that comes from reading really, really good writing—will anything I write measure up? Ever? I’m tempted to write everything in present tense now, though, so watch out.I also started to read Madeleine L’Engle’s Walking on Water: Reflections on Faith and Art. I read a book of hers about her 40-year-long marriage over the summer, and I gathered that probably Madeleine and I would be BFF’s. I was right. I struggle to write about faith, mostly out of fear that I will come across too sentimental, too didactic, or too cliche, and that fear is extremely stifling. I tend to stare at my screen and then sigh dramatically before typing “God.” In L’Engle, I’ve found a kindred spirit, willing to speak honestly and frankly about faith and doubt, love and art. I’m really enjoying this book.While I was on vacation last week, I had a lot more time to write and read than I usually do, and it was great to take a more focused look at the work. I finished a first draft of an essay about camping that I’m excited about, and I played around with some revisions to other essays.  But most of the time, I did this: 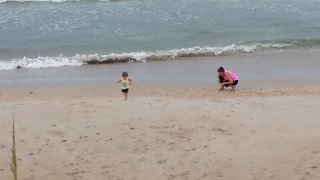 Which is exactly how I hope to spend heaven– on a beach, looking for shark’s teeth, chasing children through the incoming tide.