This weekend marked the first family vacation with my side of the family since the Great Myrtle Beach Thanksgiving Vacation Disaster of 2007. None of us said anything to reference it, but as we set up our campers at the state park on Friday night, cold wind whipping across the lake and blowing in heavy bursts of rain, I’m sure we were all thinking of it.

Back in 2007, my husband and my mom set out around 8 p.m. on the weekend before Thanksgiving with the hopes that our potty training 18-month-old daughter and 3-month-old son would drift off to sleep shortly after leaving, and they could drive through the night, arriving in the sunny Carolinas around breakfast, a bright November sun burning off the fog in the foothills, and two well-rested children slowly stirring in the back seat.

Instead, the two kids took turns keeping the other one awake, Lydia crying every time they drove under a row of streetlights or caught the headlights of oncoming drivers heading back the way they came.  Brandon and my mom took turns trying to pin clothes to the window to block the lights, played music, didn’t play music, sung, gave bottles over the back seat, anything, anything to get them to sleep.

Meanwhile, I was at home, sleeping soundly in my empty house and bed after spending most of the night painting the living room red.  I stayed behind because I had just started my job at the University that fall and for some reason I decided that my five vacation days that year would be best used some other time.  I would work the first two days of the week and then just fly down on Wednesday.  No big deal.

The family van rolled into Myrtle Beach on Sunday, alive.  I flew down to Wilmington from Columbus and arrived at the airport, ready to see my happy family at the beach for a long weekend.  Utopian dreams of previous vacations drifted in my brain, full weeks spent wandering the beach and strolling about with both my side of the family and his, smiling, sunset gazing, sandcastle building, everyone jolly and hugging and wishing it would never end.

My phone rang as I got off the plane.  It was Brandon.  A deer ran out in front of the van on his way to the airport and the van was undriveable.  A tow truck was on its way.  You’ll have to rent a van, he said, we’ll get this one repaired and pick it up on our way back out of town.

Only no mechanics work the week of Thanksgiving.  We’d have to come back for it.

The two of us rolled in to the condo and slipped as quiet as possible into the bedroom, under the blankets, the bed creaking just enough to wake up Lydia.  Mommy?  And then four hours of children awake.

Thus began our Thanksgiving vacation at the beach.  Dad and the boys arrived about the same time as I did on Wednesday and we ate our Thanksgiving dinner together in the condo.  We wrapped up the weekend with a family blow-out and a one-way rental back to Ohio.

And now.  We huddled around the campfire started with lighter fluid between the two campers, hoods up over our ears to block the wind gusts, and grumbled about the weather with my brother and his wife and my parents while the kids slept in the camper.  Lydia is now six, Elvis almost five and Henry just over a year old.

In the morning, we cooked eggs and bacon over the fire, still battling the chilly wind.  This figures! I muttered.  Can’t plan anything.  We took the kids to the playground, wobbled over the limestone boulders down to the lake side so the kids could throw in sticks, and at lunch we moved the campers to another less windy part of the park.  And then, then it was like the old days – the really old days – of fishing and cooking and roasting marshmallows and cooking hobo pie and riding bikes and making fast friends from the campsite across the way (hello, Lisa). 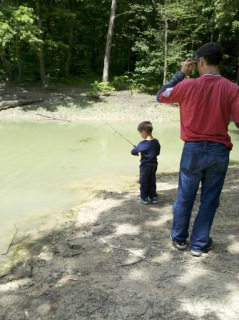 Only this time, it was me and my family giving it to the kids, my brother teaching them to fish, my husband playing catch with the older two and chasing Henry across the grass, all of us cooking and singing and drinking and eating, and me, grinning like I just caught my first bluegill by the water. 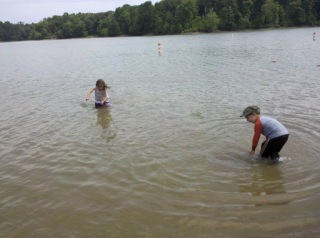 One thought on “Family Vacations, Then and Now”