Henry: “How old would the other children be if they were born?”

Henry: “I would’ve liked the 8-year-old. We would have been buds.”

I don’t know if it’s strange or awesome or awkward that all three of my kids know about our multiple miscarriages. We don’t talk about them, really, but I guess the few times we have made an impression on Henry. I haven’t told him that there’s no way we would’ve had seven kids… or that if even one of those lost babies had survived, none of the amazing little people living in my house right now would be here – not with their particular genetic structure or personality or mannerisms. Maybe he’ll realize that one day, but for now, I like that they would’ve been buds.

I like to believe there’s some kind of soul recycling machine God employs for babies that don’t make it (I know, it sounds a bit like reincarnation, but I’m not making a theological argument right now – just a wondering.). Maybe Lydia, Elvis, and Henry were false starts the first time around and caught the next ride into this world to arrive as they are now. Probably not, but it sounds like something the God of the universe could figure out. 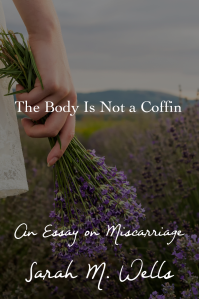 My essay, “The Body Is Not a Coffin,” is now available for purchase on Kindle. It explores the complexities and questions having miscarriages can bring to one’s faith in God. My husband and I experienced four miscarriages – a partial mole pregnancy, a very early miscarriage, a miscarriage when on birth control, and a miscarriage after hearing the heartbeat. Our first two miscarriages happened before we had babies and our second two happened between when our second and third children were born. Each of those experiences changed and shaped our understanding of God and our relationship to the Creator of the universe. If you’ve experienced a miscarriage yourself, I hope this essay helps you feel less alone.

3 thoughts on “The Lost Babies”