I began reading The Bible Tells Me So by Peter Enns today, and in the midst of my own similar writing project on reading the Bible I feel as if I’ve found a kindred spirit. This comes early on in his narrative:

“Sweating bullets to line up the Bible with our exhausting expectations, to make the Bible something it’s not meant to be, isn’t a pious act of faith, even if it looks that way on the surface. It’s actually thinly masked fear of losing control and certainty, a mirror of an inner disquiet, a warning signal that deep down we do not really trust God at all.”

Losing control and certainty. That’s a deep fear, no matter the era or generation. Abiding with both mystery and reality isn’t a space we occupy comfortably most days, and yet that space is where I find the most tension, the most strength.

Mystery and reality seem to be colliding in all of my writing. Two new essays of mine are coming out this week, and both wrestle.

My lyric essay, “Miles to Go Before I Sleep,” in the winter issue of Tiferet Journal smashes my mom’s cancer against my son’s obsession with Star Wars Legos and killing things in Disney Infinity. It wonders about death and regeneration, dying young and growing old, and paralyzing fear, fear that triggers the panic button, fear that turns you wild-eyed and unreasonable.

The essay begins with the end of the Robert Frost poem, “Miles to Go Before I Sleep,” then:

We talk about growing old, my mom and me. We talk about the crankiness of some old people, the games they play, the things they say, the way they lay blame, the way they’ve changed. Tomorrow, she will turn 54. Together we plan to take my daughter to lunch and to see My Big Fat Greek Wedding 2. The first movie is one of our favorites; we quote it nearly weekly: I peel the potatoes… OH, it’s a CAAAAKE… Toula, when are you going to get married? You look so… old.

My last living great-grandmother, Anna B. Lingro, stuck around until she was 94. She died in April of 2002. 2002?! Why did I think it was so much earlier? I had in my head her death in 1997, but it turns out she died much later. It was my grandpa who passed away in 1997. Grandpas shouldn’t go before great-grandmas.

Last night, I dreamt I remembered at a conference that my oldest son Elvis was shot dead. A girl was talking about how you can’t know my grief and I nodded and waited until she walked away because whose grief is impersonal, whose grief is common? No one’s. No one knows the depths of your personal grief. In my dream after she left I collapsed alone. My son is dead, he’s dead, shot dead. I woke up dry sobbing, clutching my comforter.

You can keep reading in Tiferet’s online edition.

The second essay, “Opportunities for Grace,” is to be published as the introduction to the Easter edition of Our Daily Bread. It begins:

My mom was recently diagnosed with stage-four kidney cancer, and as might be expected, I think about it all the time. The latest scans show more growth in her lymph nodes. Her days are filled with decisions about the next steps in her treatment, balancing the cost of expensive drugs, and dealing with insurance claims. She is not old. I am not old. We are both too young to be going through these things. Like anyone facing cancer, the first question on our lips is Why?

Even though both of these essays are dwelling in the realm of scary things no one really wants to ever have to think about, they are reality. And they are mystery. And I am abiding.

But mostly I think it has to do with letting go and letting grace fall into all the hollow places. Where I’ve tried to be in control in the past, I have given over and surrendered trust. Where I’ve felt fear and anxiety, I’ve been attempting to walk with intention and courage. Where I’ve worried over judgment and contention, I’ve unclenched my fists and tried to stop gritting my teeth.

Here with open palms I’m doing what I can to abide in hope and peace and love, in all those mysterious spaces that make this reality of holes a bearable place.

The holes, they are gaping. But what mercy fills them to overflowing.

How’s your resolution list working out for you? Here’s a little update on mine: 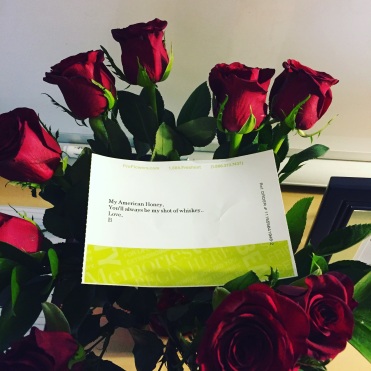