Skip to content
Building off of yesterday’s post on sharing the good news, today’s verses are encouraging to me because of the “but” that begins the passage:

“But Mary treasured up all these things and pondered them in her heart. The shepherds returned, glorifying and praising God for all the things they had heard and seen, which were just as they had been told.” – Luke 2:19-20 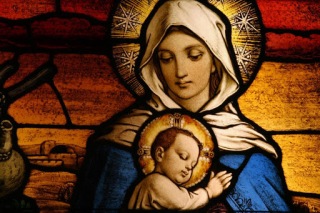 Imagine being so young, delivering this child that is supposed to be the Son of God, judgment and assumptions made by your community of friends and family who probably suspect your story is a lie and your husband is a joke for keeping you. A barrage of emotions has been rolling through your life ever since that pesky Gabriel arrived with his message of hope: fear, faith, confidence, doubt, frustration, insecurity, reassurance, and now all of these things: the shepherds, Joseph staying with her, the heavenly host of angels singing, “glory to God in the highest!”

Last year, I wrote a poem for the third Sunday of Advent, the candle of joy, called “First (Mary’s Poem).”  Those moments before and immediately following the birth of a child are distinct, vivid memories permanently imprinted.  We are the first to know this new life, this new person, the first to nurture, the first to hold.  It is too much to speak into words at first.

Advent Activity: Sigh
I give up. We made it a good two weeks with our advent activities until all efforts came crashing in, physically falling off of the wall.  The cork board advent calendar was a good idea, but the air must be too dry for the double-sided foam tape in our house.  So much for that.  Today’s activity is a manageable one, though – eat Christmas cookies! No problem.

One thought on “Advent Day 18: Treasure These Things”