Each year, opening the Christmas boxes releases magic in our house. The homemade ornaments, treasured angels and globes, snowmen mugs and dishes, candles, Christmas lights, stocking hangers, wreath, and so on cause eruptions of “Oh! Look at this!” from the kids, and honestly, from me, too.  I find myself picking up ornaments and carrying them in my open palms like birds, to nest in our artificial tree for another year.  Even the tree and its rusting hooks and plastic pine needles shed on the carpet brings a grin of nostalgia for my parents’ house, illuminating Christmases past in my mind. 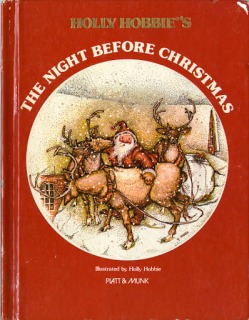 One of my favorite Christmas box delights though is our Christmas books.  We’ve collected many Christmas stories already, some inscribed and others given from preschool parties or Borders’ going out of business sales.  Holly Hobbie’s “Twas the Night Before Christmas,” addressed to one Sarah Marie Fugman from my aunt and uncle Rich and Connie Hess on Christmas 1983, emerges as a family favorite every year. You can almost feel the heat of love radiating off the pages.

When we moved to Ashland in 2007, I began writing a Christmas book for our family, in a green velvet book with a jeweled cover.  At the start of December, after unpacking the Christmas decorations, I usually sit down and read through the previous years and then record the activities of this year.  After Christmas, I usually write a summary of the holidays before putting the decorations away again for another year.  It’s my favorite Christmas book to read.

Our “day two” for Advent was “read a Christmas book.”  Lydia read us “Let It Snow!” first, and then she read “Room for a Little One” to us, which was given to her on her first Christmas by my uncle and aunt Pat and Arlene and their family.  It’s a beautiful picture book I could read over and over again.  We concluded with a read from an advent storybook that has a short tale each day about Benjamin Bear’s magical journey.  And then it was off to bed!

Does your family have any Christmas books that have stayed with you for many years?

Sarah M. Wells is the author of Between the Heron and the Moss (2020), The Family Bible Devotional (2018), Pruning Burning Bushes (2012), and a chapbook of poems, Acquiesce, winner of the 2008 Starting Gate Award through Finishing Line Press (2009). Sarah's work has been honored with four Pushcart Prize nominations, and her essays have appeared in the notable essays list in the Best American Essays 2012, 2013, 2014, 2015, 2017, and 2018. Sarah is the recipient of a 2018 Individual Excellence Award from the Ohio Arts Council. She resides in Ashland, Ohio with her husband and three young children. View more posts