The Advent season starts December 1, and I’m nipping at the bit.  I love this season.

The kids and I made an advent calendar that I stole from Pinterest (gah. one more addiction to battle.) and combined with our Nativity story books.  Each day has a different activity on it for December leading up to Christmas.

I kept them rather small scale and unambitious because this is such a busy time of year for us, with Brandon working out of town nearly every day through December 20.  I didn’t want to become frustrated by the activities, so we’re going to do things like watch Polar Express, drive around to see Christmas lights, make hot cocoa, buy Christmas presents, etc. 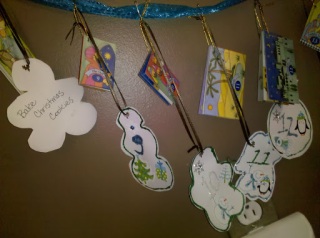 Coming up with the activities actually helped me to plan out the holiday season a little bit better than I might otherwise.

In the poetry world, I’ve been trying to write poems out of the advent wreath with its various meanings and themes.  From various Google searches, I’ve compiled this info: the first candle is the prophecy candle, primarily Isaiah – represents hope or anticipation of the coming Messiah.  The second candle represents love – Bethlehem candle, representing the manger, John the Baptist.  The third candle, the pink candle, represents joy – Shepherd’s candle, Mary. The fourth candle, purple, represents peace – Angel’s candle, the Magi. And on Christmas Eve, the white candle is lit – the Christ candle, life of Christ – purity.

I have two solid poems out of this project, the first more directly advent-ish than the other, but even if I sway from the prompt, I’m writing poems.  These kinds of projects make me think and help me stretch, so I’m not just waiting for inspiration to strike.  Sometimes inspiration is slow.  Like I’m late to work and trying to get three kids into winter coats and hats and boots but they aren’t interested kind of slow.  🙂  Amazing how motivated they are to leave the house when it’s to play.  So that’s what I’m doing for my inspiration – playing in poems.

On another note, my hearing seems to be coming back (hallelujah!), but tomorrow I have an ENT appointment just to see if they can determine what caused the hearing loss in the first place, and what I can do to prevent that from happening again.

This weekend is the Ashland Poetry Workshop.  I am teaching my first workshop.  I’m both excited and terrified.  I have a plan to reduce the terror, though, so there’s hope.