The past several years I’ve tried with varying degrees of success to incorporate advent activities to help make this season special, to be intentional about our time together. Last year, the transition following our move to Copley and a new job combined with Brandon’s football travel season made it a little more difficult. We didn’t create an advent activity calendar, like we had in past years. I didn’t string the daily advent books up in the kitchen to be taken down each day of December and read together. I didn’t even bring out the nativity scene last Christmas, forgetting where its box was and unable to identify a good spot for our little wooden Christ child and his carved parents.

Instead of daily activities last December, I talked sense to myself sought hope and joy and peace in the every day. I gave myself permission to let go of the expectation that this ritual is just what I have to do or else Christmas won’t be as special. I allowed for spontaneity, and where there was room for joy, we had some. Where I might normally default to “no,” I’ve tried to say “yes.”

Will you dance with me, Mommy? 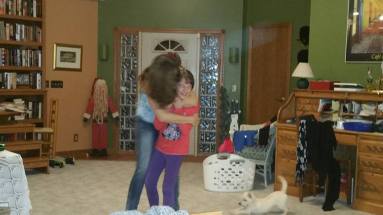 Most times, when I have said “yes,” I have been blessed, even though the weary body of mine thinks it’d be happier to just sit and shrink into itself. In spite of myself, then, a “yes” to dance to Christmas music, even for a few minutes, obliterates the sadness, even just for this moment or the rest of the afternoon–it’s still gone, washed away by movement and touch.

I’m sure you’ve noticed how hard it’s been for me to stay on the bright side of the hope of advent this year, and I’m really sorry for what probably turned out to be real downers of advent posts. But for me this year, hope is so shadowed. I can’t untangle the brightness of the season from the gloom, and that’s okay. In this, too, I think God is with me.

Here is something of a tradition we continue at Christmas. We revisit the years that have led us here. Flipping through our annual photo albums from 2008 to today, Lydia declared again and again, “I remember that! Do you remember that?” She couldn’t have remembered some of the moments in time, frozen before she was two years old, and yet because of these images she has memories of laughter, memories of dresses handed down, memories grafted in where there had been nothing but the fog of infancy.

There are so many pages. It takes at least an hour to take them all in, and when we’re done, I stack the books and carry them back to the shelf. They have weight.

“But Mary treasured up all these things and pondered them in her heart. The shepherds returned, glorifying and praising God for all the things they had heard and seen, which were just as they had been told.”

It would be much easier to succumb to the gloom and abandon all hope, abandon all decorations and rituals and traditions, but in these traditions and small surprises, there is warmth. There is glory. There is treasure.

The substance of things hoped for: more joy. More peace. More moments cataloged like these.